Laurie Kirby and Ray Grima, who were both members of the HCVCA at the time, but both having a love for White trucks, wanted to be a part of a club with more of an American emphasis and through this conversation is how the ATHS- Australian Chapter Inc all started.

On the 10th October 1991, Laurie Kirby and his partner Denise, from Croydon in Victoria, wrote to the ATHS in the USA asking them if it would be possible to have a branch in Victoria, Australia. Both Laurie and Denise did a lot of ground work into what was needed to get the ATHS- Australian Chapter Inc up and running.

They had already been corresponding with Mr Roland Smith of the ATHS, in regard to their own White trucks, sourcing information and then Laurie and Denise Kirby attending the ATHS show in Portland, USA to spend time with Mr Roland Smith. The ATHS- Australian Chapter Inc formed between 1991 and 1995, with a meeting held in Bayswater to gauge the number of interest and then being held at Anderson Creek Primary School, East Doncaster from then on.

From this, on the 9th January 1996, the ATHS Australian Chapter was registered as an Incorporation officially.

They sent out a Chapter Charter Plaque, a signed copy of the Chapter agreement and a copy of the chapter Officer Guidelines Manual.

The ATHS Australian Chapter Inc was the first chapter to be established off the North American Continent.

We would also like to acknowledge the other past and present ATHS Australian Chapter Presidents, who are: 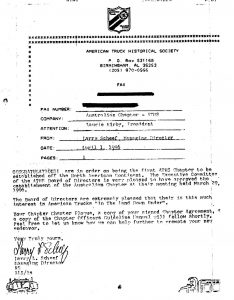 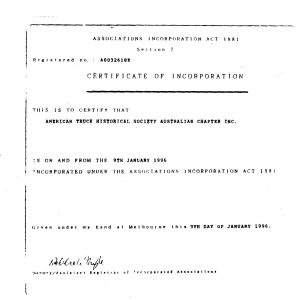 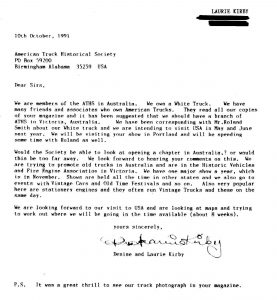